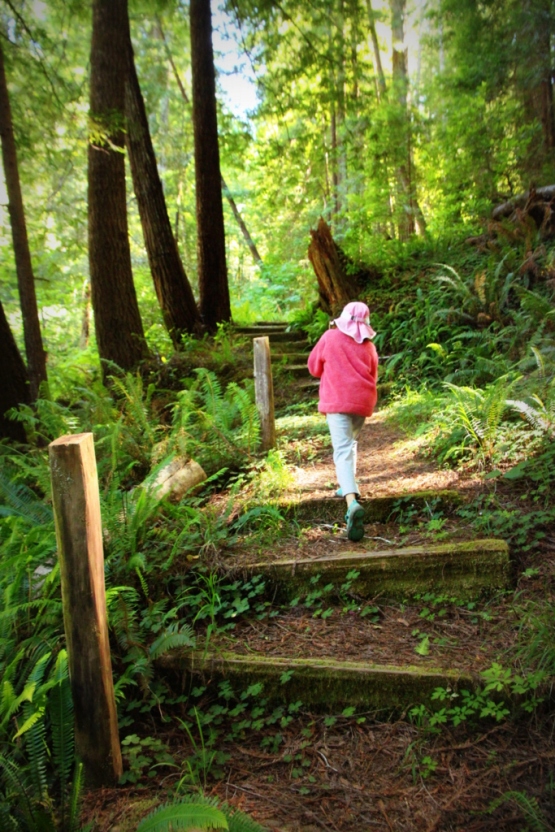 The kids and I took a trail walk on a few connecting loops that departed from the campground and ended up at the entrance gates to the park.  Since dogs are not allowed on trails, hubby offered to stay back with Lady.  Always a gentleman.  Of course, I knew “hanging back” was code for “taking a nap,” but the gesture was indeed noble. The campground is at the bottom of the state park so for most of our time we hiked upwards crossing roads, switchbacks and bridges, and climbing up plenty of steps till we came out onto the main road just a few feet from the entrance kiosk.  Now what goes up must eventually come down.  No complaints here, as going back down, is much easier than up.

The loops were easy and quite scenic, winding through the ferns and redwoods, often narrow at times.  We heard lots of birds, saw bunnies, banana slugs and centipedes and trees that resembled large animals.  We could also see the tell tale marks on old redwoods that had been logged previously and saw evidence of fire damage on trees.  Amazing to think how old the forests are and the lives that have previously been lived and made their treks through these same paths.   The kids tried to imagine why the trails are named as they are.  Was that a person’s name?  What was their story?  Since there is no way to fact check right that minute, it’s a fun imagining who they must have been and what their life held before us. 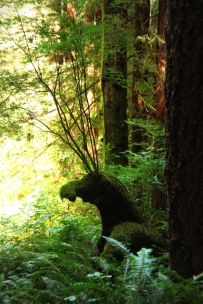 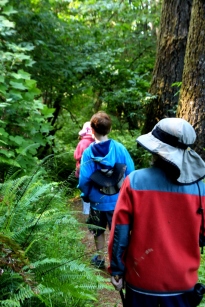 The rest of the time, the boys naturally entertained themselves carrying sticks and whacking the bushes within reach of the trail the entire way up and back.  So glad they find ways to entertain themselves although it would be nice if it was less intrusive to the plants.  My daughter on the other hand, loved to find the bridges, hollowed out tree stumps, banana slugs and fairy rings often skipping ahead singing aloud as she went. 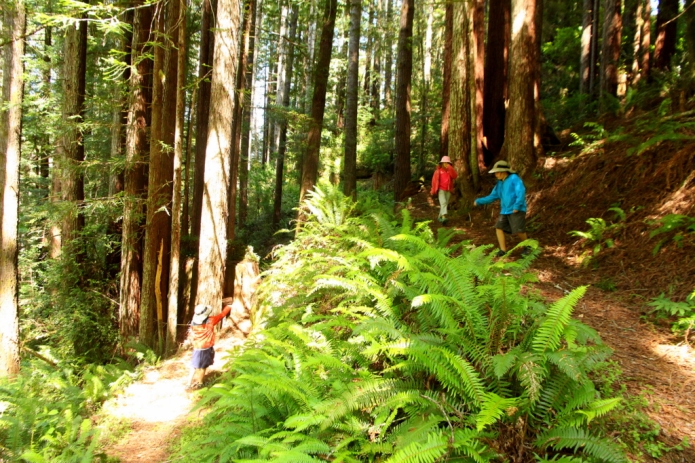 When I wasn’t redirecting the kids, I found myself blissed out in the lovely surroundings; listening to the sounds of the forest, lost in my own head and took great pleasure that the kids enjoyed themselves enough that they wanted to push further on.  We were gone longer than planned as there was always something to be seen around the next bend.  As the afternoon wore on, we eventually had to turn around and back track our way through the various loops we took.  It’s always a good feeling when you return back to camp unscathed before the rangers can be sent out to find you.  I know my hubby appreciates that.

Our summer adventures brought us through Barstow for a one night stop.  It was a 104 degrees that evening. We were grateful to spend the night in the canyon above […]
Owl Canyon Campground, Barstow, CA

It was a beautifully warm day in Lake Tahoe. A perfect day to kayak for the first time.  We contacted Tahoe City Kayaks to see if they could set  our […]
Day Trip: Kayaking on North Lake Tahoe

What a lovely state park and campground!! We arrived on Monday afternoon and stayed until Wednesday.  The time was too short and we could have stayed for a few weeks […]
Sugar Pine Point State Park Campground, CA

It was a beautiful Sunday.  The perfect day to be unplugged and be outside.  Where to go?  We packed a picnic lunch and decided on a hike somewhere out in […]
Day Trip: Santa Teresa County Park, CA

It was a four day weekend but we weren’t able to get away due to the children’s busy schedules.  Each one had something to do that was important to them […]
Day Trip: Uvas Canyon County Park, CA

Have you ever had one of those gloriously perfect weekends where every moment just falls wonderfully into place and you are left breathlessly wondering how the next moment will go? […]
Pinnacles National Park, CA